Happy 10th Anniversary to the Dork Side!

Thanks to CAD Panacea, I had a little reminder that my blog has just turned 10 years old. Evidently his first blog post was on my 25th birthday, and mine came about two weeks later.

It's been an exciting decade for me (and, luckily, not exciting in all of the awful ways of the preceding decades). I was tickled to look back at my first post, which gave the history of my naming of the blog. This week, I was discussing a FitBit challenge with my boss and had to give him my personal email address... which got the expected disbelief, followed by eyerolls. Listen!!! Nobody ever remembers my name, but, they do NOT forget my nickname once they've heard it.

Back in those days, I was heavily involved with the Gateway Autodesk Users Group, which I'd founded along with Brian Myers, after we met through the AUGI forums and wanted more local ways to learn and network. That group pretty well fizzled when I stepped down as president upon the birth of my second son. Brian and I are both peripherally involved with the Revit Users Group, headed up by Chris Link. We were happy when he approached us for advice on getting things going again, and he and Ellen Smith and all of the other local Revit gurus who serve on the advisory board and organize and present at meetings are stellar! I miss the cross-industry nature of GAUG, but, things go how they will.
At any rate, I used to edit the monthly newsletter of that group, which ended up going out to people around the world, instead of just our bi-state region as I'd expected initially. Herding authors and laying out articles takes a lot of time though, so I switched to blogging as a simpler platform.

I had also just gotten involved with doing the AUGI Salary Surveys, which I've never let go of. It is a year-round job, and probably a lot less necessary than it used to be, with the advent of so many other salary resources, but, it is near and dear to many hearts and provides a good long look at the state of our industry and disciplines.

Despite my increased involvement in the industry, a whopping 5 years into my career, I didn't know diddly then! I've learned an unbelievable amount in the intervening years, and I'd like to thank everyone in my industry and at Autodesk and other firms and on all of the forums who have provided me with endless opportunities for insight.

And, thanks to the Beta forums and Ellen Finkelstein and diverse others, I have worked as a Technical Editor or coauthor on 16 textbooks for three different publishers, as well as having had columns in CADalyst AEC Tech News, HotNews TipNiques then Polls and Surveys, and AUGIWorld Magazine Forum highlights. As well as random articles in CADalyst Magazine, AUGIWorld, CADdigest and Engineering.com and assisting in labs at Autodesk University, and a string of speaking appearances as a BIM for FM panelist.

Since I started a new job at the end of 2013, I have been working longer and more stimulating hours as a system administrator, so my blogging volume has never fully recovered from it's pre-university days and I have cut back drastically on the freelancing and consulting I do.

I have taken to tweeting and Instagramming tips as I think of them, usually with the aid of my #CADdork (aka, 'Lego Me' from the hard-to-find lady scientist set, look, she's got a mole and everything!). 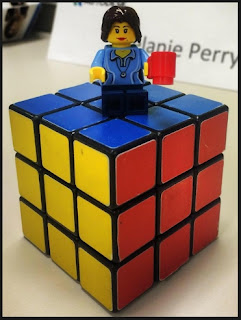 I do still stay involved with the Autodesk Users Group International, giving back to the community that has given me so much!
I am now in my 5th year (of 6) serving as a Director and an Officer of the Board... because I'm obviously a glutton for punishment.

If you would have asked me back in college how my career (and life) would turn out, I would have had no clue.
Who could have seen this coming? In the past 10 years, I've started managing projects (construction and IT), been published (and paid for it), started implementing BIM (for MEP in FM), gotten married to a fellow CAD dork, maintained 6 plotters and two large format copiers, flown to Europe three times, finished a bachelor's degree and started a master's, bought a house, had an iPaq, three iPhones, a Kindle, an iPad a FitBit and two 3d Mice and made one major career change (still FM, aw, no more BIM!)... and, so much more.

Here's hoping I can keep writing about it for the next 10 years at least.
Authored by Mistress of the Dorkness at 4/27/2015 No comments: Links to this post