Announcing Inventor Fusion - it's on the Mac

Although my work is multidisciplinary (MEPFP), I try to post generic tips and tricks for AutoCAD that anyone can use, but, my writing is always coming from the perspective of someone in the AEC industry. I do love manufacturing, though. At one of my earlier Autodesk Universities, I got to play with Inventor in the AUGI Playpen and fell in love. Later on, I even helped to prepare the presentation of the first Inventor Wishlist at AU2005 in Orlando. Too bad I've never needed to take a class on it, because the software is pretty darned neat and a far cry from the type of work I usually do.

So, what's the big news? The thing that made me carve out a sliver of my day to pepper Senior Product Line Manager, Kevin Schneider, with questions?

That would be the launch of Inventor Fusion. 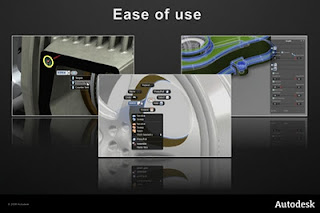 Those of you who keep an eye on the Autodesk Labs have likely heard of Fusion, since it's been in a Beta state for a couple of years now (from January 2009 through Fall of 2011), where it has been downloaded over 150,000 times.
While Fusion can be used on it's own, it will also work with AutoCAD, Inventor, Algor, Moldflow and AliasDesign. 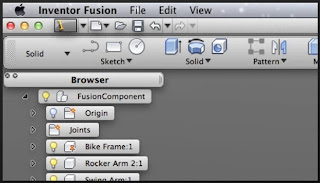 Schneider explains that Fusion is not intended as a replacement for Inventor, but, rather a tool that folks can pick up and use without a lot of extensive training and experience, something geared toward intuitive editing of existing models. I did not remember to ask for a list of filetypes, but, the intent is being able to use models from disparate sources, so I'd imagine the main players would be represented.

Don't get me wrong, there are model creation tools in Fusion as well, they are slightly more suited than AutoCAD for creating flexibly editable 3D shapes. This product is not intended for heavy engineering work currently done in Inventor, but, for small businesses and hobbyists and students who want to explore. There will also be some sort of simple connection 'to the cloud' for sharing.

I haven't used Fusion myself, but, I did download 123D when it was on the Labs, because I thought my 3rd grader would get a kick out of it (which he did). As Kevin was demonstrating the ease of use of Fusion, I asked him if there was a connection between the products, because I'd found 123D so simple and intuitive and they had a lot of similarities. He did say that that was the type of thing the teams were going for, sharing the ideas of usability and what was working for users and what wasn't... in the half a dozen releases of Fusion to Labs, different approaches to intuitive manipulations of models were tried and either vetted or rejected. 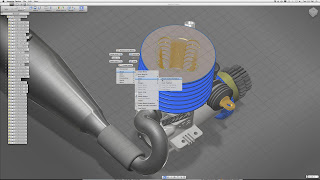 Email ThisBlogThis!Share to TwitterShare to FacebookShare to Pinterest
Labels: Applications

Do people still feel that way about technology?

This post isn't cad/bim/fm specific, but, I feel the issue encompasses those fields so I'll go ahead and post my little opinion piece here.

As I've noted, I have been a student at Saint Louis University since 2008. I'd originally wanted to complete a degree in Mechanical Engineering, but, there were no engineering degrees offered through the night school. Instead I opted for a coursework in computer science and management. Half of my classes came from the computer science track, the other half have been organizational studies.

In the Organizational Studies courses I have had, I am used to helping out a little with the technology side of thing, either setting up the projector for the teacher or giving the other students advice on what tools to use and how to use them. It's sort of what I do in school, and, heck, even working in an office full of engineers, I'm called upon to do it.
Even in the Computer Science classes, the majority of students are women and the average age is probably 45.
At 28-31, I've definitely been on the younger end of the spectrum, just like I am at work and in my social group in our neighborhood. In other words, I don't have many friends my age or younger, except those that I've had for more years than I'd care to count, which should help explain my sense of shock.

I must have some misconceptions about the world today.

For my final course, I am working on an extensive group project that accounts for our grade. I suggested that we use Google Docs, for sharing efficiency and for breaking down the papers into manageable chunks, which we could divvy up amongst ourselves. I did not think it was a big deal that 3 of my 4 group-mates hadn't ever used it before, since Google Docs is so simple to use, if you've used a web browser and MS Office.
Evidently I was wrong.
I ended up bringing my laptop to class to demonstrate the use of google docs and make changes to our papers during class.
At one point, the oldest member of our group asked me if I could fix her computer. I advised her to take it to a professional since I hadn't taken apart laptops before.
Then, the youngest member of our group commented that I'm obviously one of those techy people, and how she hates it at work that all of the old people assume she understands how to use computers and software just because she's young, and went on to say that she was too busy being outside playing when she was younger to care about computers.

That's what techy people are? Adults who used to be kids who sat inside all day and didn't play outdoors?

So, the reason I am shocked here, is not because people in general have a misconception of those with technical skills, but, really, because someone around my age has those misconceptions. I mean, I can understand it from my Mother's generation a little, but, I really thought the world was more enlightened and accurate these days.
I posted about my guidance counselor back in high school advising me to put my math and logic skills to use as an accountant, but, again, she came from a different generation with the ideas of gender roles and as I had no real strong opinions myself ~shrug~. In the 10 years that the AUGI Salary Survey has been running, female participation has stayed steadily near 15%.

But, gender issues notwithstanding, I am really shocked to hear a young person imply that techy people aren't normal. I thought techy was mainstream enough these days?

But, no, computer geeks and engineers et al are evidently basement-dwelling oddballs.
~sigh~

Obviously, WE know that's not true, don't we, faithful reader?
We see the foursquare checkins from our fellow geeks at exotic locales and admire the flickr streams that show where they've been hiking, biking and boating, and follow the progress of their marathon training on facebook and google+. 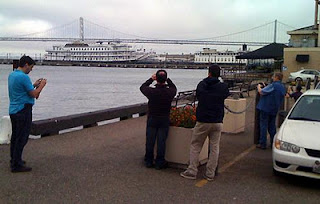 Email ThisBlogThis!Share to TwitterShare to FacebookShare to Pinterest
Labels: off-topic, Women In Design

Friday Funny: Most Powerful AutoCAD Ever!!!

Just to end the week with a chuckle, please see the flyers in this image: 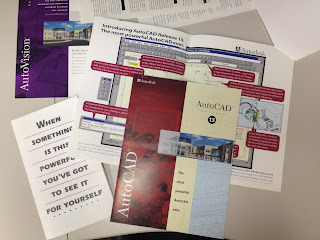