How to approach BIM for Renovations?

I just saw this post "Useful Approaches to BIM for Renovations" by Jose Oliveira.

He talks about the approach to modeling a project in an existing building (by using existing documentation, CAD or hardcopy, and filling in the blanks with laser scanning), as well as the benefits of doing so.


Obviously, coming from the owner side, my approach is different for projects. If we have a model (RVT), and we make a small change in-house, or notice an inaccuracy, I update that. If we only have CAD and need to make a small change, I update that. If we only have blueprint documentation of a specific area, I'll draw it up on our CAD plans, using a PDF underlay as a reference.
We don't create these DWGs or RVTs from scratch in-house, they are all done as a part of construction projects. We have budgets for new construction, but, we do not have budgets for documenting existing spaces, so we often have to wait a long while to get updated electronic files.

As appalled as most on the design side are, that I say we're still about 12 years out from completing our CAD to BIM transition, I have to point out that things do not happen fast in Facilities this big. It took us 15 years to get the majority transitioned from paper to CAD.

A space being renovated today is prepared in the Revit family, and will be used with Maximo for CMMS (and the existing conditions were turned over to the design team on CAD).

The last time this space was renovated, it was done with AutoCAD, and was used with MP2 for CMMS (and the existing conditions were turned over to the design team on paper).

The preceding 70 years? All on paper.

It does make one curious to know what technology we'll be transitioning to in another 15 years.
Authored by Mistress of the Dorkness at 12/24/2012 2 comments:

I haven't had a guest post in awhile, so, I am pleased to share a writeup from one of my tweeps, Andrew Michler. He has provided the content and images in today's post.
Long-time readers of my blog might have noticed that I rarely post negative or critical commentary here. I am a firm believer that we bring about positive things by having a positive attitude, and I hope that my offbeat critiques about software and events are well couched in the positive light in which I tend to view them. I know this lack of overt negativity has occasionally earned me the somewhat derisive term of 'fangirl' from some readers (which bemused me enough to include in my blog's description -> ).
However, you will notice that today's topic is more overtly critical. I prefer to think of it as 'critical thinking' and 'questioning a status quo' rather than a complete condemnation, and I hope you do, too.

BIMwashing is a term I have had to introduce my management team to in recent years, because they (as facility owners) have been promised the moon... and received a telescope. Greenwashing can easily fall into the same trap of 'good enough' and 'at least we tried.'

Do you have a story you'd like to share about BIMwashing or challenging the status quo? If so, please contact me to be a guest poster.

The quaint City of Fort Collins, a university town an hour north of Denver, curled up under the great peaks of Rocky Mountain National Park, is the quintessential American environmentally friendly place to grow your roots. They have the greenest beer and the greenest University and a downtown that Disney’s Main Street is modeled on. Just a block up from the bicycle bars and free range restaurants is perhaps the city’s most singularly impressive contribution to sustainability. 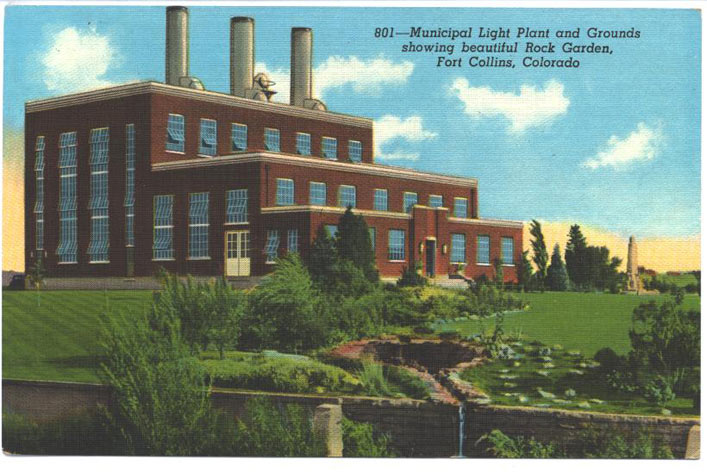 Formally known as the Colorado State University Engine & Energy Conversion Lab, the now rebranded (that seems to happen a lot around these parts) Powerhouse Energy Institute claims some of the great innovations of energy conservation and technology to come to market. Ironically, yet fittingly, housed in a long defunct coal plant’s steel and brick shell are enormous natural gas engines. The lab first got their feet wet by developing a state-of-the-art retrofitted fuel injection system and a laser ignition. They shrunk the tech to make fuel injection conversion kits for the filthy 2 stroke motorcycles popular in the streets of smoggy Manila. Envirofit, the most successful rocket stove in production was ignited under this roof. The largest-of-its-kind electrical smart grid simulation was developed here, as well as Solix’s state of the art algae fuel technology. Basically, this is the home of really smart people who are pushing the limits of what is attainable into a very busy and complex marketplace. 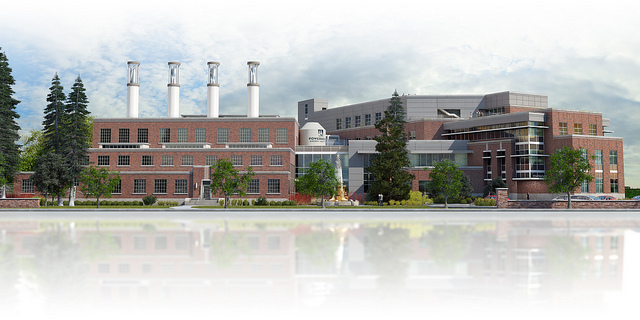 When the plans to expand the research center were announced, things started to fall down. I first saw this rendering when visiting the winning firm that just happens to be located in the same town. The fact that they were chosen to both design and build the project looks, at first blush, to have a nepotistic feel. But, my mind was quickly diverted by a poster of the proposal as I was walking out. It had four Vertical Axis Wind Turbines (VAWT) where the old smokestacks once belched their black fog. My second thought was, “Cute, I get it, you’re saying that renewables are the new standard.” My last thought, as the poster left my field of vision was, “No way will those VAWTs stay in the renderings for long, haven’t we seen enough of this greenwashing by now?”

Urban VAWTs were the darling technology ten years ago. For a variety of technical and economic reasons, they have never proven to work as promised. Witness comments of HOK’s Chicago wind powered parking lot or the demise of Helix Wind. I have made it a rule not to write about a building which has one, an exception I am making in this case. Writing about sustainable architecture, I am happy to report I rarely see them stuck on roofs anymore, especially as an ‘architectural statement’.

I promptly took the opportunity to make an [expletive removed] of myself last year by cornering the Institute’s Director with this rant. It is funny that we ran into each other again at Greenbuild this year, at an outdoor window shading manufacturer’s booth. CSU also has a terrific wind lab, and a quick survey and wind rose from those good folks would probably show that, not only is it hard to VAWTs to perform well, they don’t work at all in a river valley adjacent to very big cottonwood trees. That conversation was apparently forgotten, as when the design build firm recently contacted me to write on the project, they sent the pretty picture with the VAWTs still spinless-ly crowning the newly rebranded plant. I couldn’t help but wonder how this feature survived the design rounds?

Adjacent to the site is a new pseudo-retro office building whose only visual nod to this century is a ring of overhangs for shade. The addition is, amazingly, less contemporary than the original plant. My response to them follows: “A nod to contemporary sensibilities would have shown the EECL to be a real player in 21st century technology, but instead, the design is a soft generalization of the original building telling me that good enough is the lay of the land.” That’s me pretending to be an architecture critic.I also stated my anti VAWT-on-buildings policy and got the reply that the turbines are for student research. Which begs the question, why four of the same? And, are they researching how VAWTs don’t work well next to trees in river valleys? If I were asked, my advice is to blow the budget by installing the outdoor window louvers and kibosh the pricy hood ornaments.

There is some great stuff happening here, with an evaporative cooling system night chilling the floor and LEDs using the building as a heatsink. There is bit of confusion about the R-value and U-value of the windows and how they are measured (center of glass vs whole unit) but I am sure they are pretty good. Sadly, these attributes are obscured by a design that is like a kid who is dressing for church in hand-me-downs.

Architecture, for better or worse, is very much about messaging so we get ‘it’. Cue the success of firms like BIG who go bold just about every chance they get, whether in the end it turns out to be a good idea or not. They take risks via innovation. This particular project belittles the mission of the client by running away from risk and into the arms of mediocrity, handing the community and owners a collective sigh… “It’s good enough, but at $200 a square foot, at least it’s cheap”.

Innovation is about not about pointless tech or even seeking LEED Platinum certification. After all, you only get a few points for innovation in their rating system. Innovation is about identifying and pushing the limits of what we know and pursuing the perfection of low impact design. Then use that design to announce we are building for a better century. Our buildings, quite simply, are the largest contributor to global warming so ‘good enough’ signals premature life on Earth failure. A community who imagines themselves as green and pats each other on the back for ‘good enough’, rather than pushing each other forward, will struggle to become a vital place for the necessary architecture of this century.

Andrew Michler is currently working on the book
[ours] Hyper-Localization of Sustainable Architecture
Authored by Mistress of the Dorkness at 12/18/2012 No comments: