I will be posting the Salary Survey again soon (it is published in the September issue of AUGIWorld Magazine, so I like to take August to calculate the results, and run it for 6-8 weeks). 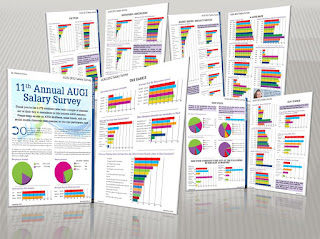 At any rate, as I mentioned in this post ( http://mistressofthedorkness.blogspot.com/2012/07/augi-2012-salary-survey-is-revamped.html ). Previously, I had between 10-15 questions, primarily focusing on salary, but, now:

This year's survey consists of 25 questions, roughly broken down into four areas:
As always, prior to launching the survey, I go back through all of the emails I've received regarding the survey for inspiration. BUT! if you take a look at the 2012 survey results and come up with any suggestions, now is the time to send them in to me (remember the FAQs, too).

And, don't forget, some of the other authors like to throw in additional information and advice on salaries and management cares. Have something specific you'd like to see in your favorite AUGIWorld column? Contact one of the Content Managers to make a suggestion. They have an 'editorial calendar' that gives them a specific theme to follow each month, but, for September, they and their authors can come up with their own ideas. 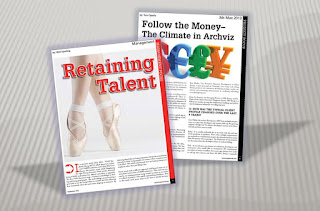 Oh, and a refresher on the questions (remember, it's always anonymous, in no way connected to your username):
Demographic
Job
Company
Industry
I look forward to examining our industry with you, please remember how valuable your information is and take part in the survey once it is live!
Authored by Mistress of the Dorkness at 5/31/2013 No comments: Links to this post

Anyone who might happen to follow me on Twitter or who has befriended me on Facebook or circled me on Google+ knows that I've been preoccupied with an office move recently. Really, it's a project that has kept me occupied over the past three years, as our department was one of the last to be decanted from 400,000 square feet of buildings on the chopping block. Finding temporary homes for all of the displaced functions was, luckily, the job of the project management and real estate teams at the corporate level. But, I did have to provide documentation from the current and proposed spaces for each of these moves, depending on the adaptations needed for each.

I was just reading a post from Life of An Architect's Bob Borson this morning. He's starting a new job, but, his post about what was in his office, and what it meant to him, reminded me that I wanted to share with you a reflection on how my work has changed here over the past decade+, but, mostly over the past five years (since my last office move).

I'm currently in an office, but, I'm certain that our next move will take us to a cube farm, so, these observations the engineers and I made as we moved are a good thing. 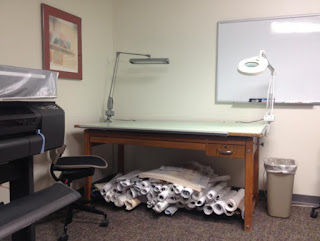 First things first, the drafting table. I was tempted not to even bring this along during our move. It's not been used as a drafting table since maybe the early 90's, about half a dozen people before me. (If you notice the legs are a bit short, it's because the Director used to have it in his office about 20-30 years ago, and cut it down to be the same height as his desk, so that he could scoot between them.)
My facility has not accepted paper closeout documents (record docs, as-builts whatever you call them) since 2001 or 2002, but, yet, people still insist on sending multiple copies to the Engineering team (when my boss only asks for one set, because he gives them to the mechanics). I keep them, until I can verify that I've got the DWG or RVT files from that project (many times I do not, but, that's a separate rant ;) ).

The engineers used to use this table for plan reviews all the time, but, they've gotten more and more comfortable with reviewing plans on their computers, or on the workstations I set up around the campus, which have larger monitors.
This plotter is on the chopping block, too, because we just don't do all that much printing anymore.

As I moved, I dumped sets and sets of reference drawings that I used to be asked for constantly (when asked for a common set in B or D sized, I'd run off multiple and keep them handy for the next person coming through, it was a brilliant move that saved me loads of time, I assure you). However, it's been years since I've been asked for a paper set of drawings. Most of the (non-engineering) folks that want to do markups on a set, just ask for PDF from us. ~recycling the remainder~ I think I can also comfortably dump the set of riser diagrams that were always kept in the engineering department's file room (getting in the way, but, luckily on a wheeled rack), because, the engineers and lead mechanics that usually need to reference them are now doing so electronically.

Inside that drafting table is a little something special...

Until just a couple of years ago, there were also some slide rules and other engineering templates resting within this time capsule. Those belonged to my Great-Grandfather, who was a Civil Engineer in Southern California. He came to live with us as he and Great-Grandma got older. After he passed away, my Grandfather kept his things in a box in the garage. And, after my Grandfather passed away, my Dad took over the garage. After my Dad moved out, I took over the garage and have kept them since I was a teenager. Obviously, I never did manual drafting professionally, myself, but, I kept them as a connection to my G-G. And, as a 'wanderer', I left them here in my office, which has stayed fairly constant for 13 years, while I changed personal addresses quite often. Now that I'm settled down in a nice house in the burbs, I've brought them home and showed them to my sons, who can inherit them from me one day (if they ever want to open a museum, of course ;) ). 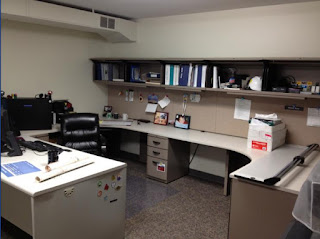 Now, my desk doesn't show much outward change, but, when I moved into my last office and took this furniture (we scavenge okay, we don't get a big move budget like the money-making departments), I filled up these 5 file drawers and 8 smaller drawers and had loads of paper organizers on the work surface, too.

I had binders for each of the projects I had managed. I had markups from the projects the engineers ran, markups from mechanics for changes they'd made or noticed in the field, tons of cd's and disks people would submit or find for me, and (this is my favorite) a paper copy of every work request made to me between 2000 and 2009.

Now that we've got more reliable IT backup, I no longer worry about files disappearing (which they'd done before, unfortunately), I can let go of the paper backup copies. I never open these binders.

It was fun running across some things, like the directory printout from when I started and there was NO filing system on the server yet, because no one was in charge of it (I had IT lock it down so only myself and the ME could write to it).

So, all of those drawers? They're now filled with equipment. Cables and cords, a couple of laptops, a projector (which I need to replace with something newer, by the way ~note to self~), my toolkits (for computer and plotter repairs) and sundry.

I'll admit that many of the binders remaining in my overhead storage could disappear. All of my AU handouts there on paper are now available in the AUGI forums, so I really don't need them on paper, nor some of those project binders I inherited when I took on various roles (from our Cabling Coordinator and Programmer when they left), but, I still have a hard time letting go.
And I don't need too much space to store CD's/DVD's anymore, since most of my file distributions are done via FTP or similar.

I even have a folder full of the furious notes I took at a meeting back in 2003 when I first heard of CAFM and Archibus and the whole world of data management gloriously opened to me.
For the past few years, I've taken notes electronically on my laptop, and in the last couple of years, I take the notes or work requests electronically on my iPhone and email them to myself, or access them from Evernote or Google Docs as appropriate.
There is a challenge in explaining to some of the luddites that I'm not 'texting' or playing games, I'm taking notes, and that's slowly overcoming the prejudice I initially encountered.
But, everyone else in the office has been switched to iphones recently, so there are a lot more multi-media notes from site visits, which is great. Also, during our own office renovation, no one thought to bring copies of the plans with us, so I pulled up the dwg file I'd emailed to myself on AutoCAD WS (now Autodesk 360 for mobile).

And so...
I started working with CAD very young and have felt like I was dragging my company kicking and screaming into the light. The move from paper to CAD, now the move from CAD to BIM (expect about 15 years for each technology shift, that's how we roll in a company this large, no matter the department). Five years ago, during our last move, things had improved slightly, but, since then, things have progressed more rapidly.
I look forward to that trend continuing.
Authored by Mistress of the Dorkness at 5/28/2013 No comments: Links to this post