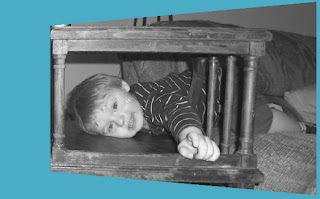 I've been SUCH a slacker lately... well, actually I haven't. I've been precisely the opposite, in fact. But, to some people it might appear that I'm neglecting my poor little blog.
I finally signed the lease on the new apartment (I will miss some parts of being a homeowner, but, for now, I am totally happy to turn over most concerns to my landlord). I'll be taking a couple of days off of work early next week to get things moved in and set up.
Amazingly enough, this place has a larger/nicer backyard for my son to romp around in than my old house did.
So, while I was out putting some things in the truck, the neighbor approached me and started asking me about AutoCAD (yeah! I know, how often does THAT happen? lol). He inquired as to what versions I was familiar with. It seems that his son has just started working as a drafter (I think designing electronics), and asked if there was any way for him to get access to software now that he's no longer a student.
I told him, 'Man, I wish you'd have mentioned this a couple of days ago, we just had our LUG meeting and gave away a seat of AutoCAD and a seat of Inventor... but, we still have a couple of packages left, so, tell him to come to some meetings this year and try to win one.'
So, he runs and gets his son. We spent a good while talking about what software he is using at work, what they're thinking about upgrading to, what else he'd like to learn, new things he's just discovered (hint for the beginners... this phase never ends, I've been using AutoCAD for 10 or 11 years and STILL find things I didn't know about). I told him about the AUGI forums as well as a little more about the LUG. He said he'd pop up to the forums and check them out, so I hope he's found some more information from the great users over there.
I have to admit that this was sort of weird for me... I have known the neighbor for 3 years now and he's suddenly all impressed with me, what a trip. Seriously, it was cool talking about CAD to someone who is so new to actually using it at work and is still very excited about the technology. I have to confess, I really sounded pathetic talking about all of the things that I do that are CAD-related... including this blog... I really need to get out more.
I am sending out my newsletter a little late this month, apologies to my readers and distributors. Trying to work while moving is a challenge... Unfortunately, after my move is complete, I will no longer have a PC or an internet connection at home.
I'm really looking forward to a nice, fun, relaxing weekend after I move in and get settled.
Authored by Mistress of the Dorkness at 5/04/2005